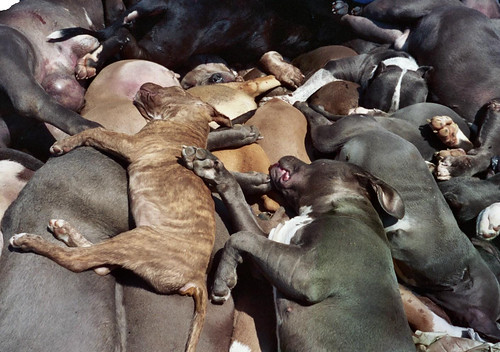 Image by Beverly & Pack
These pictures have made it onto the Westword Blog the Denver news blog.

When people go to visit their dogs in the Denver shelter, and have to leave their dogs there–actually walk away–as the dogs are screaming to go with them, it is almost too much to take. And the dogs have no idea how they got from their comfy sofas to that concrete hellhole. Many that have experienced this have said they have never heard their dog make that panicky sound before.

These are pictures of just one load of dogs that Denver has rounded up and killed as part of their breed ban. "Well," you might say, "dogs are killed every day in shelters across the land." Yes, they are and it is all awful. But these were dogs who had homes. These were owned dogs that got picked up and killed for what they look like, not for anything they did. Underneath this pile of dead dogs, but not shown, were something like twelve puppies that were not even weaned yet. The photographer wanted to show them, but didn’t have the heart to move the bodies of the adults around to show the puppies. Either way, this is how a breed ban manifests itself–in the rounding up and killing family dogs.